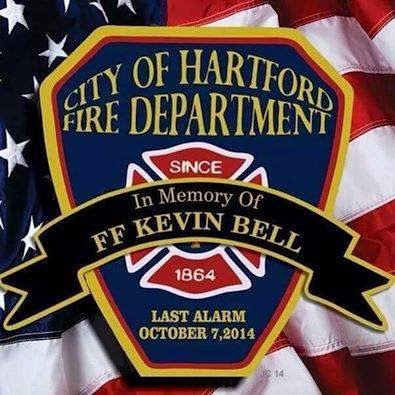 Father Of Firefighter Killed Tuesday: “I Was Very Proud Of Him”
OCTOBER 8, 2014, 10:33 AM
HARTFORD — Hartford firefighter Kevin Bell was killed and three others were injured fighting a house fire on Blue Hills Avenue Tuesday night.
Bell, 48 and a member of the department for six years, came to firefighting relatively late in life, inspired by a relative, according to his father Manuel Gomes.
“He saw how [retired Hartford chief] Charlie [Teale] came up through the ranks and made chief,” Gomes said Wednesday. “I would always see him talking to Charlie.”
Gomes said Teale, who is his cousin, showed Bell how to apply for the academy, but left the rest to him. “He mentored him but everything Kevin did he did for himself,” Gomes said. “I was very proud of him” Gomes said Bell was married to Wayatte Statham-Bell and had a daughter, Raquel.
One of the injured firefighters was burned over 10 percent of his body and was flown to the burn center at Bridgeport Hospital, but he is expected to survive, Mayor Pedro Segarra said. The other two were being treated for injuries at Saint Francis Hospital and Medical Center.
 ”Today, we lost one of our own, someone who lost his life so that others might be saved,” Segarra said at a news conference Tuesday at the city’s public safety complex. “He’s a hero.”
He was the first Hartford firefighter to die battling a fire in 40 years.
The fire was reported about 6:30 p.m. at a two-story home at 598 Blue Hills Ave. Members of two families were in the home at the time, but escaped without injuries, fire Chief Carlos Huertas said at the news conference.
Segarra did not identify the firefighter “out of respect for his family,” but said he was 48 years old and had been with the department for six years. The firefighter was born and raised in the city, Segarra said.
“Our hearts are extremely heavy at this time with the knowledge that these brave men and woman risk their lives every day to protect our city,” the mayor said.
“I can tell you the suffering and grief is indescribable” for the family of the victim, Segarra said. “One of our firefighters lost his life serving others,” Huertas said.
Gomes said Wednesday that Bell’s lifelong passion was music and that he produced music and also dee-jayed parties and events around town.
“Firefighting was his vocation but music was his passion,” said Gomes, adding that he talked to his son about the dangers of the job.
“I said I’m glad you got the opportunity, but be careful,” Gomes said. “And he said ‘they trained us great, I’m very careful.'”
“This is a tragic, tragic accident.”
Bell’s cousin, Ed Martin, said Bell was one of the first rap/hip-hop producers in the state. “He was a great person,” Martin said.
He said Bell played several instruments, managed bands and even put out a few albums.
“He was always a person who wanted to learn and get better,” Martin said. “He could go outside and hear the wind or hear birds and make music out of that.”
The fire department ordered all firehouses to lower flags to half staff.
The last firefighter to die at a fire in the city was Thomas Fischer, who died on Sept. 15, 1974, on Park Street.
Huertas said he did not want to go into the specifics of the fire other than to say it was a two-alarm assignment, but he said it was under investigation and that the state fire marshal’s office was assisting.
“Our entire department is grieving but there will be no loss of service,” Huertas said.
A witness to the fire, who did not want to be identified, said he saw one firefighter jump through a second-story window.
Mary Lewis of Bloomfield said her daughter was home in the lower portion of the building when the fire broke out in the second story. Lewis said her daughter got out safely and that her daughter’s son was up the street at the time.
 The woman who lives on the second story was not home when the fire started, Lewis said.
Blue Hills Avenue, a major road in Blue Hills section of the city, was closed from Tower Avenue to Boothbay Street as of 10 p.m. Some residents who had not been home at the time of the fire were still waiting to be let into the area.
Witnesses said initially they could see massive amounts of smoke, but that soon they could see flames in the rear of the house.
“You could see the smoke and when you went around back you could see fire,” said Andre Suarez, who lives on Blue Hills Avenue.
Suarez was heading south on Blue Hills Avenue from Bloomfield with a friend when they saw smoke. He said the stopped and saw a woman outside the home screaming.
“We saw the smoke and we asked if anyone was in the house,” he said. “She said no. … So we called 911.”
A fire station is not far away at 636 Blue Hills Ave. Huertas said that companies responded within minutes of the call.
“Tonight’s tragic events are another reminder of the incredible sacrifice that our state’s first responders make on a daily basis,” Gov. Dannel P. Malloy said in a statement. “Our thoughts and prayers are with the family of the hero we lost tonight and those who were injured in the line of duty in our capital city.”
By Michael Brinius at October 08, 2014
Email ThisBlogThis!Share to TwitterShare to FacebookShare to Pinterest